The Institute of Estate Agents has elected Lanice Steward as President at its 78th annual general meeting. Lanice is only the second lady to hold this prestigious position.

Lanice has served on the IEASA Board since January 2014 and was Vice President prior to her recent appointment.

The Vice President position has now be filled by Edgar Blomeyer.

“Lanice and Edgar will bring a fresh vitality and passion to IEASA that will serve it well over the coming years.” said IEASA outgoing president Jeanne van Jaarsveldt, who remains on the Board as the Immediate Past President.

Lanice thanked the board for having elected her as President of the organisation. “It is a great privilege and I look forward to working with everybody”.  She congratulated Edgar and thanked Jeanne for all the work he did whilst he was President.  Lanice went on to say, “I am confident that as a team we will be able to grow the Institute and make our contribution, building on the proud legacy behind us.”

The board looks forward to working with Lanice as a dedicated team to ensure that value is added to our members, increasing our membership and assisting in contributing to the growth and transformation of the property industry nationally. 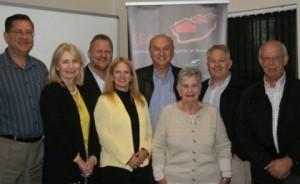