The end of the year is finally upon us.  In this report and in all future reports over the next few months we will be unpacking and highlighting certain clauses in the draft Property Practioners Bill to give you a detailed  understanding of the concerns we have and our response to them.

We would like to take this opportunity to wish you well over the Festive Season.  At the same time we would like to say thank you for your valued support, for your feedback and compliments.  Through raising your concerns we have been able to identify a number of issues that need to be addressed and we look forward to building on these throughout the new year.

Take care of yourselves and your families.

As you are all aware, the draft Property Practitioners Bill is due for release next year.

After a prolonged period, on 18 November 2014, The Department of Human Settlements were finally supposed to present the Property Practitioners Bill to the parliamentary committee.

REBOSA was invited to attend to get first-hand information on the way forward , thanks to Mr Jeremy Marillier our dedicated representative at parliament. However, this meeting was unfortunately cancelled at very short notice and will now apparently happen early next year.  This means the publication of the Bill will be moved forward.

We have instructed attorneys Cliffe Dekker Hofmeyr to analyse the draft Bill in its current format so as to prepare us for comment as soon as the opportunity arises.  This will more than likely take place in February / March next year.

REBOSA is therefore well prepared for this eventuality.

Additionally, we have secured a meeting with The Hon. Makashule Gana, Deputy Federal Chairperson of the Democratic Alliance and Shadow Minister of Human Settlements to brief him on our concerns regarding the proposed Bill.

In the current Estate Agency Affairs Act the Minister appoints 15 board members.

The board is appointed for a three year term.  This invariably means that when a new board is appointed a few months are unproductive as board members must first acquaint themselves with all the issues at hand before becoming proactive.

Estate agents however, have a one third say i.e. 5 of the 15 board members are estate agents.

In terms of the Property Practitioners Bill this is to be changed dramatically.

The new Bill proposes 12 board members and with only 2 members being estate agents.  This effectively gives estate agents only one sixth (two out of twelve) of the say.

In our view this is not justified as the Board benefits from the knowledge of experienced agents who understand the industry and we think that the one third ratio should rather be retained.  Please also consider this issue in light of the fact that the draft legislation requires mandatory retirement of the various representatives and that continuity of experienced estate agents on the Board is essential to ensure the effective and efficient ongoing functioning of the Board.  With only two industry representatives on the Board, it is not difficult to see how a situation could arise where continuity amongst industry representatives is broken.

Further to the foregoing, it appears that in effect the entire Board will be replaced every three years (albeit some members may be reappointed).  One of the difficulties currently being experienced is that when a Board is replaced it requires a period of time before the new members are able to effectively contribute in the context of what is a very complex industry.

Our suggestion would therefore be that the model be amended so that one third of the Board retires every year and new members are appointed (or, where applicable, reappointed) so that at all times the Board constitutes at least two thirds of members who are continuing.  Ideally this should also be arranged in such a manner that at no point in time do all the members of the board representing a particular industry or skill set retire at the same time.

Concerning the nomination of the property practitioners who sit on the board, we believe such nominations should be effected by real estate industry representative associations.  The reason for this is that the appointment of very inexperienced agents to the board will not be conducive to the proper and efficient functioning of the board and nor will it serve the broader public interest.

Note that while members of the public apparently can make nominations, the appointment is made by the Minister. This raises questions as it is not impossible that the persons nominated and appointed will have been specially selected for a particular political purpose.

REBOSA will seek to have all these concerns clarified when the Draft Bill is released for commentary.

On the 1st of October 2014, the National Environmental Management: Biodiversity Act (NEM: BA) (Act No. 10 of 2004) as revised by the Department of Environmental Affairs minister, Bomo Edith Edna Molewa, was enforced across South Africa. In short, the act contains lists of alien species across a number of taxa/ groups (e.g. fish, birds, reptiles) that have been declared invasive within South Africa.

We have attached a legal opinion of this new Act from our attorneys Miltons Matsemela for your perusal. They also suggest that should you wish to incorporate this new law into your standard sale agreements, you can include a clause on the following lines:-

“The Seller hereby records that to the Seller’s best knowledge and belief there are no Listed Invasive Species mentioned in terms of the Regulations to the National Environmental Management: Biodiversity Act 10 of 2004 upon the Property.  It is however recorded that as the Seller is not sufficiently qualified to identify such Species that the Purchaser accepts the risk inherent in purchasing the Property with any Listed Invasive Species which might be thereon.“

REBOSA’s board of directors were instructed to find a property portal solution at the AGM on 20 June.

It is clear that property portals have become part of the life of an estate agent.  The entire market is currently dominated by four portals only.  Property 24 is the current market leader and has cancelled its contract with the industry.

An action committee was formed and we have investigated all possible options, even that of starting a new portal.  This notion was discounted very early on due to insurmountable challenges and negotiations then proceeded with the four biggest portals in an effort to negotiate a contract favourable to the industry.

This process has moved forward and we hope to be in a position to report our progress before the end of 2014.

You can rest assured that this issue has been treated as a priority over the past few months.
Professional Designation Examination (PDE 4 AND 5)

Disclaimer All estate agents that intend to apply to write the Professional Designation Examination for either PDE4 or PDE5, please note that George, Bloemfontein, Polokwane, Rustenburg, Kimberley and Nelspruit examinations will only be conducted in May and November and those wishing to write examinations during February and August should enrol at the larger centres.

The Estate Agency Affairs Board encourages all examination candidates to ensure they order the study material well in advance so they are fully prepared to write the examination.

It is to be further noted that estate agents can order the study material at any time and not necessarily only when one intends to write the examination.

On 7 November the NAR officially welcomed REBOSA as a new global alliance partner by signing an agreement of cooperation at the 2014 REALTORS® Conference & Expo in New Orleans.

Dr Andrew Golding, REBOSA’s Chairman was present at the official signing ceremony to sign the agreement.

We have attached an article that Nancy Macaluso, National Association of Realtors, President’s Liaison to South Africa, wrote titled South Africa Rising which mentions the event. 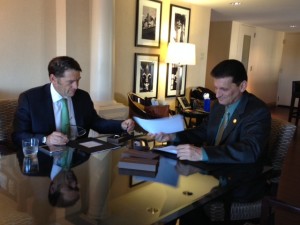 Fiona Chaitowitz continues to work miracles at the Board and we again remind you that you can email her on Fiona.rebosa@gmail.com to assist you with any issues or concerns you have. The gracious email we received from one of our members recently bears testimony to the great work Fiona is doing at the Board.

“Hi Jan Thank you sooooo much for what you guys have done to get us back on the map again. We paid a R2000 fine – it wasn’t worth arguing the point.  A very kind person by the name of Gladys Mogakwe helped us (Fiona says she thinks she’s a temp there but they should have her as permanent staff – she was kind and helpful). And especially thank you to you and your staff  – you have been wonderful to us and we really cannot thank you enough for your time, effort and trouble. We are now unblocked and can carry on working thanks to your and Fiona’s help. We have sent her a letter of thanks as well. Do have a wonderful Christmas and may 2015 be a great year for all of you. Many strongs to you and your staff with all your uphill battles. Take care and enjoy a wonderful and safe festive season Kind regards Maria”

We continued conducting our Regional Q&A sessions in the Western Cape with great success.

We would like to thank Kathy Divaris for arranging a session bringing all the Commercial Property Brokers together and to Dykes van Heerden for inviting the huge number of Principals that attended our session in Durbanville.

We would like to thank our New Members for joining following these sessions and a special mention must go to our faithful REBOSA members who have continued to work tirelessly this month spreading the REBOSA message and recruiting new members on our behalf. 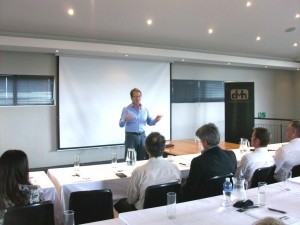 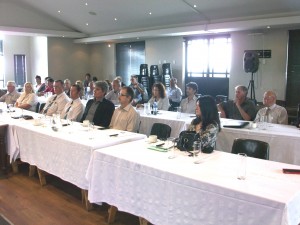