South Africa Rising was the theme I chose, during my 2013 visit as the National Association of REALTORS® President’s Liaison to South Africa.  I named it that as South Africa rose to meet the world’s economic leading countries being recognized as one of the “BRICS” countries- Brazil, Russia, India, China, South Africa.

This year, in its second year of the emerging middle class market, South Africa continues to show signs of good business in the residential market place. Visible indicators include more real estate advertising in their country, ads supportive of real estate ancillary businesses, such as, maintaining a home, financial institutions mortgages, and homeowners insurance; along with, advertisements that indicate community stability and a happy family environment.

As it happens, there is a non-scientific track record that the South African economy has been following that of the United States by approximately a 6-month period for quite a few years.  If business is on the rise in the US, South Africa will often follow. With this in mind, when I travel to South Africa, one of the tools I use in speaking with Estate Agent members, is research/statistics from NAR’s Chief Economist, Laurence Yun’s office.  This information helps South African real estate practitioners measure and prepare for future business (an economic indicator).

Signs of continued housing and commercial growth are evident in both the northern country (Pretoria) and the southern section (Cape Town) seeing new housing developments, commercial strip centers rising, resort properties, and larger grocery stores that resemble those in the U.S.  I was taken to one grocery store to meet with the new Manager, and to my surprise he was from Boca Raton, FL, a community just 30 miles south of where I live in Southeast Florida.  The shelves of the new store were well stocked to meet his diverse customers’ purchases, including refrigeration cabinets with pre-prepared foods, reflecting the fast-paced lifestyles of modern South African households.

2013 also brought the birth of South Africa’s first totally “cloud-based” real estate office in Cape Town, run by an International REALTOR® Member, Toni Enderli.  Enderli relocated his company’s office from a standard store-front on a commercial block, to a location in the heart of a busy shopping center. Placing their office location strategically at the end of the center with outside windows off the entrance of the shopping center, where the consumer has to pass by their office to enter and exit the center’s grocery market.  In their windows were 9 flat screen television sets, all rotating from one subject matter to the other (current listings, neighborhood information, consumer testimonials, agents discussing the benefits of working with this progressive firm and their progressive iCloud work environment).

On my most recent visit to South Africa, I was introduced to some city planners, builders, and commercial agents who believe their country must educate the upcoming generation to sustain a future for their country. They have banded together in building new schools at each level to support this commitment.  One of the old jails, has now become an award winning university with all the technologies for learning.

South Africa is a real estate license country, with a 2-year continuing education requirement.  The Institute of Estate Agents of South Africa (IEASA) has been a global partner of the National Association of REALTORS® for over 30 years. This organization represented real estate for most of those years, then due to a government mandate a few years ago, the Broker Owners were to separate from the Estate Agents by law.  This took a few years to re-establish and define how brokers/owners would work with their agents.  This gave birth to the new Real Estate Broker Owners of South Africa (REBOSA).  NAR welcomed REBOSA as a new global alliance partner by signing an agreement of cooperation at the 2014 REALTORS® Conference & Expo in New Orleans last week.  This brings both Associations within their levels of country representation (owners and labor) and cooperative business with NAR.

South Africa’s currency is the RAND, currently trading at ten Rand to one USD (10 Rand= US $1).  This makes South Africa an affordable destination for commercial and residential investors from the US, and many other countries worldwide.   With South Africa rising, opportunities are rising.

As NAR’s President’s Liaison to South Africa, I’d like to invite you to visit the websites of NAR’s South African alliances, IEASA and REBOSA.   If you have any questions about NAR’s partnerships in South Africa, or if I can be of further assistance, please do not hesitate to contact me at nmacaluso@comcast.net. 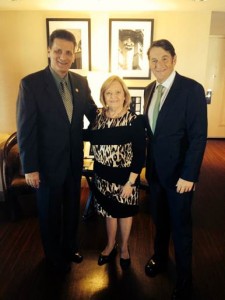