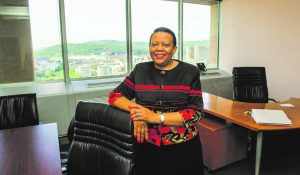 Johannesburg – The walls are still bare. There is a desk, table and chairs, but there are no documents, files, stationery or boxes anywhere. But as soon as Pansy Tlakula, chairperson of the country’s newly established information regulator (IR), walks into her office, things start to happen.

Along with her own laptop, she brings the ideas, experience and energy needed to transform the new regulator into a functional entity that will ensure compliance with the Protection of Personal Information (Popi) Act and the Promotion of Access to Information Act.

Tlakula headed the Independent Electoral Commission, but resigned from her post in 2014 following allegations of maladministration.
Armed with a law degree from University of the Witwatersrand and a master’s from Harvard University in the US, Tlakula was appointed as chair of the IR on December 1, as part of the implementation of the POPI Act.

The IR’s other members are advocates Lebogang Stroom-Nzama and Collen Weapond – appointed on a full-time basis – and Professor Tana Pistorius and Sizwe Snail ka Mtuze, appointed on a part-time basis.

Tlakula says she and her staff have been “squatting” in Pretoria, on the 23rd floor of the building occupied by the department of justice and constitutional development, while new offices are being sought. Despite this, they have already been hard at work implementing an organisational structure.

“Since December, we have been thinking through how the institution should work and what it should look like. We are busy with regulations, as required by the law.
“Hopefully, these will be published in the Government Gazette by next year.”

IR personnel foresee a structure which will include a legal and compliance unit, as well as a unit dealing with complaints, investigations and dispute resolutions.

These require qualified staff with experience in investigation and litigation work.
Tlakula wants all appointments to be concluded by December, after which the regulator can advise President Jacob Zuma to promulgate the rest of the legislation.

As soon as this is concluded, public and private bodies will have a grace period of one year to comply with the law.

“I understand [this grace period] as noncompliance will cost us dearly,” says Tlakula.

In addition to instating possible prison sentences and fines of up to R10 million for noncompliance, individuals can also institute civil claims under POPI.

Tlakula says she is not afraid of building something from the ground up, having been part of the team tasked with establishing the SA Human Rights Commission after 1994.

Tlakula has been involved with the African Union (AU) Commission for 12 years. She is its special rapporteur on freedom of expression and access to information in Africa and, last year, was appointed chair of the AU’s African Commission on Human and People’s Rights.

This post has entailed her analysing the media laws and policies of various member states, and playing an important role in ensuring that countries adopt laws promoting access to information.

In the past four years, the number of AU countries that have adopted such laws has risen from five to 19.

Tlakula, who turns 60 this year, says once her term at the AU ends later this year, she will focus solely on her work at the IR.

“The point of departure must be openness and transparency, which means that the free flow of information is where everything begins. Currently, the protection of personal information overshadows the promotion of access to information. There has to be a balance.”

She refers to cases in Africa where governments have cut internet access and blocked the use of social media in the name of “national security”. That can lead to abuse or create a society that is not transparent.

What will Tlakula do, as head of the IR, if a stranger phones her to sell her insurance or a new cellphone contract?

Regarding her leaving the IEC after being caught up in a tender controversy, she admits it was hard. “I told myself I had made a contribution and perhaps it was time to move on. Many people appreciated my contribution.”

Tlakula, a mother of two daughters, says when she retires, she would like to help young professional women to find the balance between work and lifestyle.

For now, though, she is excited about her new post. “I am passionate about freedom of speech and access to information.”